Posted on 8 December 2014 by geofftansey 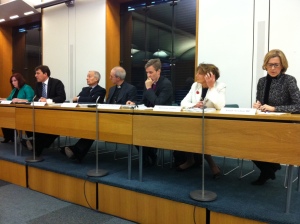 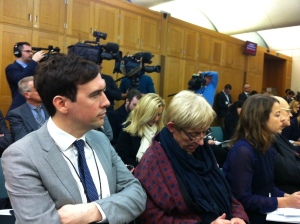 After a blaze of publicity yesterday and in front of TV cameras today, the All-Party Parliamentary Inquiry into Hunger in the United Kingdom was launched this morning in Parliament. You can hear a full recording of the launch event here:

Copies of the report and evidence are now available on their website. They are strongly critical of the poverty premium, whereby poor people pay more for basic services such as gas and electricity. They also criticise the way benefits and claimants are treated and low wages for those in work.  One of their most controversial conclusions calls for institutionalising the growing number of food banks.

Elizabeth Dowler, Professor of Food & Social Policy, Department of Sociology, University of Warwick, who gave evidence to the Fabian Commission on Food and Poverty, which I chair (#foodandpoverty), while welcoming publication of the APPG report commented that:

“The creation of a new institution (‘Feeding Britain Network’) whose task is ‘tackling hunger’ through giving people ‘food waste’ is deeply questionable, on efficacy, democratic and social justice grounds. The strong evidence cited by the report of stigma, distress and shame among those having to ask for food and other help, and the equally important needs of those with disabilities, special dietary needs or other conditions, are ignored in the proposed response.

The proposals essentially use one of society’s food problems (a food system which relies on surplus production – aka ‘waste’) to address another (people cannot afford to buy enough food because of inadequate or uncertain pay and/or social security benefits).

We must not lose sight of justice: ‘food waste’ cannot and must not be seen as the solution to ‘food poverty’.”

Leading Canadian researcher, Prof Graham Riches, argued strongly against seeing food banks as any solution to dealing with food and poverty, in an interview I did with him recently. He urged governments to fulfil their obligations under international law to respect, protect and fulfil the right to food.

At the non-party, independent Fabian Commission, we are looking more broadly from a food system perspective at the relations between food and poverty – see also my blog. Our first hearing in November covered money and affordability, and the second, tomorrow Dec 9th, covers context and access. Further hearings in early 2015 will cover health, environment, the supply chain and society. We will be drawing on the evidence gathered by the APPG but very much welcome the submission of further evidence.

In the Fabian Commission, we are also working with a group of people in Manchester directly affected by food poverty throughout the life of the Commission and connecting with their and others’ lived experiences of the links between food and poverty.

I curate the Food Systems Academy, a free, on-line, open education resource to transform our food systems. I am also a member of the Food Ethics Council and chaired the Fabian Commission on Food and Poverty, which reported in 2015.
View all posts by geofftansey →
This entry was posted in Reports and tagged food poverty, hunger, UK. Bookmark the permalink.