Posted on 16 February 2018 by geofftansey 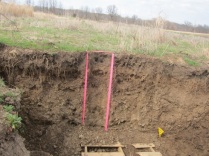 It seems to be a year of anniversaries for me. It’s 50 years since I went to university intending to study chemistry but then changing to study soil science. Soils are really complex physical, chemical, biological systems. Their health is affected by the social, cultural and economic activities of us humans who depend on them for our existence. Soils also host a huge amount of the biodiversity on the planet, yet you cannot see most of it.

I was prompted to think about this by a paper I was sent the other day. Its rather long title is “Our house is burning: discrepancy in climate change versus biodiversity coverage in the media as compared to scientific literature“. Basically, the multiple authors found that comparing the amount of research reported in the scientific literature on climate change and biodiversity versus the amount of coverage in the selected range of newspapers over a 25 year period showed a considerable imbalance. Given the level of research reports, there was far more coverage – up to 8 times as much – of climate change issues in the 12 English language newspapers they surveyed than that on biodiversity.

Climate change and biodiversity loss both impact on human well-being. This imbalance in coverage is impeding understanding and undermining efforts to address biodiversity loss. The authors called for more action by scientists to raise public awareness on biodiversity issues.

There have been a lot of longer-term scenarios and what is often called ‘horizon scanning’ on the impact of climate change. Much less so for biodiversity loss, most of which is hidden. The focus tends to be on the impact on iconic larger mammals like elephants, polar bears or tigers. Yet with soil, you need to dig down into it to see the different horizons in a soil profile. The amount of biodiversity in it is far from obvious – but is beautifully illustrated in the global soil biodiversity atlas (free to download).

While the biodiversity in soils may be largely invisible to the naked eye, healthy soils depend upon it (see also http://www.soilanimals.com/look/overview). However, as the report on The Status of the World’s Soils Resources noted “…the majority of the world’s soil resources are in only fair, poor or very poor condition. Today, 33 percent of land is moderately to highly degraded due to the erosion, salinization, compaction, acidification and chemical pollution of soils”.

The Global Land Outlook said “A minority has grown rich from the unsustainable use and large scale exploitation of land resources with related conflicts intensifying in many countries.”(see ch 9 on biodiversity and soil). To address concerns about this we also need to look at the rules, regulations and power relations that frame what people do with the soils and biodiversity on the planet. Here, one important set of rules are also little known and invisible to most people – those called ‘intellectual property rights’.

It is 20 years since I worked on a paper looking at the implications of the Agreement on Trade-Related Aspects of Intellectual Property Rights (TRIPS) for food security and biodiversity (Trade, intellectual property, food and biodiversity: key issues and options for the 1999 review of article 27.3(b) of the TRIPS agreement). This agreement is one of the three key pillars of the World Trade Organisation (WTO). Ten years later a book I edited with a Canadian colleague, Tasmin Rajotte, was published called “The future control of food: a guide to international negotiations and rules on intellectual property, biodiversity and food security“(free to download in English, Spanish and Chinese). Rules on IP are also a key bone of contention in bilateral trade negotiations.

What is clear over these last couple of decades is there has been much greater coverage and concern about climate change but less about the huge loss of biodiversity and especially agricultural biodiversity and the rules that shape what happens to them. It is time that changed.

I curate the Food Systems Academy, a free, on-line, open education resource to transform our food systems. I am also a member of the Food Ethics Council and chaired the Fabian Commission on Food and Poverty, which reported in 2015.
View all posts by geofftansey →
This entry was posted in Comments and tagged biodiversity, climate change, climate destabilisation, global warming, Intellectual Property, land, Soil, soil degredation, TRIPS. Bookmark the permalink.