#Food’s role in creating healthier, happier #cities for all

Posted on 29 October 2018 by geofftansey 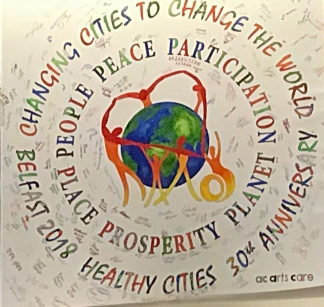 Belfast in Northern Ireland is, unfortunately, perhaps best known for the decades of violence, called the Troubles, and as the place where the ill-fated Titantic was built. While the local TV news bulletins were reflecting about how the start of the Troubles could be traced back to events some 50 years ago, they also carried a report about the World Health Organisation (WHO) International Healthy Cities Conference 2018 held in the city from 1-4th October 2018.

Representatives from 60 countries and more than 200 cities – roughly half of them located in the WHO European Region – gathered in Belfast for this. I was asked in a keynote to the final plenary to reflect from a food system perspective on the aims set out in the Copenhagen Consensus of Mayors document, ‘Healthier and happier cities for all – a transformative approach for safe, inclusive, sustainable and resilient societies’.

Addressing the challenges our food systems face is a key element in any strategic approach to delivering on the Copenhagen Consensus’s goals as they touch on every aspect of the people, places, participation, prosperity, planet and peace focus in the document. And turning the aspirations in the declaration to emerge from the Belfast conference (click here to download) into reality requires cities to focus on the role they play in shaping food systems and how those food systems need to change to deliver healthy, sustainable diets for their citizens.

They require cities and urban areas to know their food economy and its impact, to use advisory, regulator and fiscal actions to support fair, healthy and sustainable food systems, to see food as a way to build community connection and enjoyment and to work together with other cities to share best practice and influence national, regional and international policy that support these goals.

Taking the Consensus’s six themes in relation to food, areas to address include:

People – city actions on food accessibility, availability and affordability and ensuring food systems include any excluded communities, with a focus on eliminating household food insecurity.

Participation – involving people (particularly the vulnerable and excluded) in the food system (for example, through school projects, procurement of catering services from vulnerable groups) and create events that celebrate and connect different cuisines and food cultures.

Prosperity – tackling poverty and its impact on people’s diets and health through the mechanisms at cities’ disposal, including monitoring household food insecurity, as well as measuring urban ‘success’ or prosperity through a food systems lens, including seeing a sustainable food system as a focus for urban economic development

Planet – leading by example and using sustainable procurement for the cities’ own services, and with advocacy for sustainable food systems through city diplomacy and in global networks

Peace – ensuring food security within a city, and contributing to food security beyond the city, which requires measuring household food insecurity and acting to eliminate it, in keeping with Sustainable Development Goal 2, Zero Hunger.

The theme for the Belfast meeting was ‘Changing Cities to Change the World’. Belfast has been involved in the Healthy Cities movement since it started 30 years ago with the creation of the WHO European Healthy Cities Network. And today the city, or at least parts of it, has been transformed. The Troubles are over, although people I spoke to expressed concern that the impact of Brexit could destabilise the area once again. From the waterfront conference centre to Titanic Belfast, a lot of investment has been put into the infrastructure in central Belfast. Indeed, Titanic Belfast has now had 5 million visitors since it first opening 2012, and in its first five years has brought in £160million to the local economy. Participants in the conference went on many site visits to where change had been happening.

As WHO argue, cities have a vital role to play in achieving better health for all and making progress towards the Sustainable Development Goals (SDGs). While they occupy only about 2% of total land in the world, cities’ impact is substantial. They account for 70% of the global economy and over 60% of global energy consumption, and produce 70% of greenhouse gas emissions and 70% of global waste. Sometimes viewed as the culprit behind many of the most pressing challenges facing the world, they can and must be viewed as the drivers for change and finding solutions to these problems.

The healthy cities movement started in Europe 10 years after the landmark WHO conference on Primary Health Care in Alma-Ata. This adopted the definition of health as being a state of complete physical, mental and social wellbeing, and not merely the absence of disease or infirmity. It also called for urgent and effective national and international action to develop and implement primary health care throughout the world and particularly in developing countries – something that has yet to be achieved.

After the European network was established, other healthy city networks grew up in all the other WHO regions. And once again this month WHO has been meeting in Kazakhstan in Astana at which they once again made a commitment to primary healthy care for all. “Today, instead of health for all, we have health for some,” said Dr. Tedros Adhanom Ghebreyesus, Director-General of the WHO. “We all have a solemn responsibility to ensure that today’s declaration on primary health care enables every person, everywhere to exercise their fundamental right to health.”

There is an intimate connection between food, health and sustainability. To carry the work forward from both Belfast and Astana, requires making those connections. One step would be to link the healthy cities work to that coming from the Milan Urban Food Policy Pact, signed up to by 179 cities with 450 million inhabitants. As that text recognises ‘current food systems are being challenged to provide permanent and reliable access to adequate, safe, local, diversified, fair, healthy and nutrient rich food for all… cities which host over half the world’s population have a strategic role to play in developing sustainable food systems and promoting healthy diets’.

I curate the Food Systems Academy, a free, on-line, open education resource to transform our food systems. I am also a member of the Food Ethics Council and chaired the Fabian Commission on Food and Poverty, which reported in 2015.
View all posts by geofftansey →
This entry was posted in Comments, Reports and tagged Belfast, cities, food, health, sustainability, World Health Organisation. Bookmark the permalink.