Posted on 9 November 2020 by Geoff Tansey

Here, I’m reposting a blog I wrote for the Rethinking Security website last week. I argue that there is no security without food security. Meeting the real security needs of humanity necessitates the progressive redistribution of military budgets toward ending hunger and achieving sustainable development. 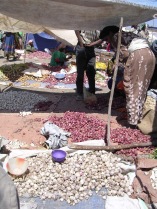 As Covid-19 exacerbates inequalities nationally and globally, more and more people are becoming food insecure in both richer and poorer countries. According to the UN’s 2020 report on the State of Food Security and Nutrition in the World almost 690 million people went hungry in 2019. And the number of hungry people has been rising since 2014, well before the pandemic hit. COVID-19 could push over 130 million more people into chronic hunger, it says. That means one in every nine humans going hungry most of the time.

This matters for both human security and physical security. Last month saw the 75th anniversary of the founding of the UN Food and Agriculture Organisation and the World Food Programme awarded the Nobel Peace Prize “for its efforts to combat hunger, for its contribution to bettering conditions for peace in conflict-affected areas and for acting as a driving force in efforts to prevent the use of hunger as a weapon of war and conflict”.

The second of the Sustainable Development Goals, a range of objectives adopted by the UN in 2015, is for zero hunger by 2030 and to promote sustainable agriculture. Yet the heads of the five UN agencies behind the report warn that “five years after the world committed to end hunger, food insecurity and all forms of malnutrition, we are still off track to achieve this objective by 2030.”

The price of food security

Ceres2030, a research group headed by Cornell University, the International Food Policy Research Institute (IFPRI), and the International Institute for Sustainable Development (IISD), estimate that to reach the zero hunger goal by 2030 some $33bn/year is needed, with $14bn from donors and the rest from affected countries.

Seems a lot? Not really. Especially when the world’s governments spent almost £2 trillion on the military in 2019, according to the Stockholm International Peace Research Institute. In the UK the departmental budget for Environment, Farming and Rural Affairs for 2020 is some £4.3bn, while that for Defence is £39.2bn.

It seems blatantly obvious that defending people’s fundamental needs cannot be achieved through devoting such huge amounts of resources to military spending. It cannot defeat the COVID-19 virus. It cannot deal with the other great long-term, slower-acting threats to human security – climate change, biodiversity loss and growing inequality. It is also clear that arms spending and exports help fuel conflicts that in turn increase food insecurity.

As the UN’s 2017 report on the State of Food Security and Nutrition noted: “Exacerbated by climate-related shocks, conflicts seriously affect food security and are a cause of much of the recent increase in food insecurity. Conflict is a key driver of situations of severe food crisis and recently re-emerged famines, while hunger and undernutrition are significantly worse where conflicts are prolonged and institutional capacities weak.” Violent conflict is also the main driver of population displacement.

To reach the SDGs, not just in food but across the board, we need new approaches. There are calls for fundamental change to our food systems after we get through the current pandemic – for example, see IPES paper COVID-19 and the Crisis in Food Systems. Now is the time to seize the opportunity to progressively redirect spending from that which cannot defend humanity from these threats, military spending, to that which can.

Everyone, everywhere needs food – produced in fair and resilient food systems that respect people, animals and planet, as we say in the Food Ethics Council. And everyone has multiple identities, mother, father, son, daughter, belief system, a community, a nationality, etc. But the core identity that we all need is to see ourselves as Earthlings, spread across different cultures and continents but with common needs, even if expressed differently. These are clearly shown in the various farming systems and cuisines that have developed around the world. We have to get beyond a focus on competition to realise that the mark of any successful social species is the ability to cooperate. Successful social species have to cooperate to survive as they make complex systems.

To do this, we need to put our resources to work in the right direction. This then is the time to seek a worldwide commitment from every country to progressively redirect its military spending away from mechanisms and machines with which to better kill each other into life enhancing and environment sustaining activities. By doing so we will achieve the sustainable development goals, conquer hunger, poverty and make a fairer, healthy and sustainable world for this and future generations.

Food security in the UK

Defending us Earthlings, in whichever country we live, rich or poor, against the real existential threats to our food security requires unprecedented cooperation between countries and peoples. In the UK, as I write, the issue of avoiding children going hungry in school holidays is hitting the headlines, with a variety of short-term immediate solutions being discussed. But this is symptomatic of a much deeper problem of growing levels of food insecurity and poverty, as were highlighted by the Food Foundation, footballer Marcus Rashford and others and as we found in the independent Fabian Commission on Food and Poverty, which I chaired.

This challenge, compounded by the need to restructure farming systems and dietary patterns along more ecologically sound, healthy and sustainable lines, is about beginning to understand what true defence spending means for people’s security in the 21st century. For the UK there is an opportunity for government to engage in such a rethink as it embarks on an Integrated Review of Security, Defence, Development and Foreign Policy. This “will define the government’s vision for the UK’s role in the world over the next decade”. The review provides a real opportunity to lead in redefining what defence and security mean and progressively redirect domestic resources to address the existential threats to people’s well-being, which sadly have been highlighted by the pandemic.

On April 16, 1953, US President Dwight D. Eisenhower said, “Every gun that is Fmade, every warship launched, every rocket fired signifies in the final sense, a theft from those who hunger and are not fed, those who are cold and are not clothed. This world in arms is not spending money alone. It is spending the sweat of its laborers, the genius of its scientists, the hopes of its children. This is not a way of life at all in any true sense.”

It is time to stop that theft. Time to bring together a wide range of constituencies campaigning for this, such as The Global Campaign on Military Spending, Tipping Point North South, Stop Fuelling War, with businesses and NGOs across a wide range of fields to develop positive programmes, such as the Business Plan for Peace, to enable humanity to truly defend itself from hunger and food insecurity, climate change, biodiversity loss and inequality.

I curate the Food Systems Academy, a free, on-line, open education resource to transform our food systems. I am also a member of the Food Ethics Council and chaired the independent Fabian Commission on Food and Poverty, which reported in 2015.
View all posts by Geoff Tansey →
This entry was posted in Comments and tagged Ceres2030, Food Ethics Council, food security, IPES Food, real security, SDGs, World Food Programme. Bookmark the permalink.

1 Response to Real Defence Spending Ensures Good Food for All