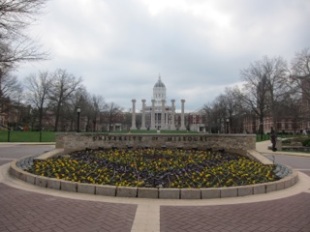 How much tolerance does a plant have for drought? Or a traveller for disruption? Quite a lot for the latter it seems as leaving Columbia, Missouri for Toronto last month, I had one of those nightmare journeys with delays, a plane cancelled in Chicago, unexpected overnight stay, another plane cancelled the next day and re-routing to get me to Ottawa in time for two talks. That rather messed up my plans to finish blogging about the visit and I’ve only just found the time to finish off.

Before I left the University of Missouri, I met a man fascinated by how a plant can become a completely dried out (desiccated) dead looking thing for years then suddenly, within a few seconds of having a drop of water added to it, go back to shape and green and within 20 minutes start re-growing? That’s the question intriguing Mel Oliver, research leader of the Plant Genetic Research Unit of the USDA’s Agricultural Research Service, which is also located on the University’s campus.

Watch the video of the rehydration

and listen to him talk about this and why it may be useful in understanding this for drought resistance in crops:

Mel is a member of the Interdisciplinary Plant Group at the University that brings together over 50 scientists who want to work together cooperatively around the fundamentals of how plants work.  It is led by Bob Sharp, an expert on the physiology of plant root growth, whom I met with his colleague David Braun, on a visit to China last year (some blogs on that to come soon). It was they who invited me to come to the University and give a talk based on the one I’d given in China, entitled “Food and thriving people: Paradigm shifts for fair and sustainable food systems”.  A revised version of this has just been published in the open access journal Food and Energy Security (click to download).

There’s a broad mix mix of people at the university with a wide range of interests going beyond the basic scientific research. Even within the scientists there are different views. While some are busy seeking ways to tweek the composition of major crops like soya others question the need to do so and trying to make soya do everything but would rather work on having a diversity of crops, many of which have better nutrient profiles, but lament the difficulty of geting funding for alternative crops.

Others at the University, such as Mary Hendrickson and her colleagues in the Department of Rural Sociology are looking more broadly at food systems, science and public policy. Their Food Circles projects aims at developing “a community-based, sustainable food system by reshaping the relationships that surround food”.  She, along with Bill Heffernan, did a lot of work in the past on the structure of the markets, in particular on the level of concentration among the different firms in any particular part of the food system. The CR4, for example, is the concentration ratio (relative to 100%) of the top four firms in a specific food industry. (Click to download paper)

Interest in food goes right to the top of the University as it is its Chancellor, Brady Deaton, who chairs President Obama’s Board for International Food and Agricultural Development (BIFAD). This seven-member board advises USAID on agriculture and higher education issues pertinent to food insecurity in developing countries. Interest in food also starts young, as was pointed out to me as I walked past a fenced off bit of land on the campus that’s been made available for the children in the kindergarden to use for growing food (see below). 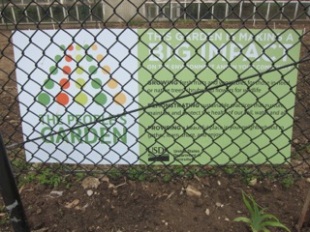 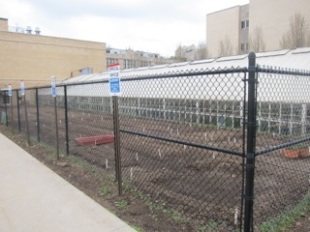 I curate the Food Systems Academy, a free, on-line, open education resource to transform our food systems. I am also a member of the Food Ethics Council and chaired the independent Fabian Commission on Food and Poverty, which reported in 2015.
View all posts by Geoff Tansey →
This entry was posted in Uncategorized and tagged Bob Sharp, Brady Deaton, Concentration Ratio, Dessication in plants, Food circles, Interdisciplinary Plant Group, Mary Hendrickson, Mel Oliver, University of Missouri. Bookmark the permalink.